This Technical Note (TN) describes a demo application used to show the combination of an inference algorithm, namely keyword spotting, and asymmetric multiprocessing scheme (AMP) on a heterogeneous architecture. This use case can serve as the basis for more complex applications that have to carry out the following tasks:

This scenario is quite common in the realm of "AI at the edge" but, generally, can not be addressed with a microcontroller-based solution because it would take too long to run the inference algorithm. On the other hand, a classic embedded processor running a complex operating system such as Linux might not be suited either because unable to handle tight real-time constrained tasks properly.

In such cases, the power and the flexibility of the NXP i.MX8M Plus can be of much help, as this SoC features a heterogeneous architecture — an ARM Cortex-A53 complex combined with an ARM Cortex-M7 core — and a Neural Processing Unit (NPU).

The idea is to exploit i.MX8M Plus' architecture to implement an AMP configuration where

Several documents dealing with AMP configurations were published in the past [1]. Most of them refer to homogeneous architectures, which pose some well-know limitations when it comes to implementing asymmetric multiprocessing schemes. At large, the structure of the i.MX8M Plus allows to overcome such limitations.

The testbed is illustrated in the following picture. Basically, it consists of an Orca Single Board Computer TBD

As stated previously, the inference algorithm is keyword spotting. Data being processed are thus audio samples retrieved by the Cortex M7 and sent to the Cortex A53 complex. 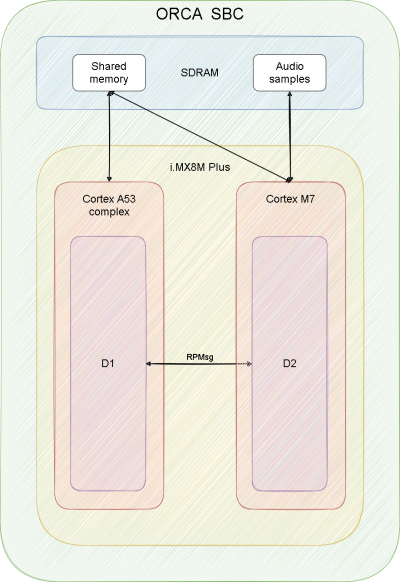 D1 and D2 communicates through the RPMsg protocol. On the Cortex M7 side, the RPMsg Lite implementation by NXP is used. The interface between D1 and D2 comprises a shared memory buffer as well. This area is used to exchange audio samples between the domains. Synchronization messages are exchanged over RPMsg channels instead.

For the sake of simplicity, the audio samples are not captured by the Cortex M7 with a real microphone. They are retrieved from prefilled memory buffers inaccessible to the Cortex A53 cores. For the purposes of discussion, this simplification is neglectable as the communication mechanisms between the domains are not affected at all. Likewise, the inference algorithm could probably be executed by the powerful Cortex M7 core itself. This is not a big deal as the aim of this TN is to show an architectural solution that can be tailored to address more challenging, real-world use cases.

The reserved SDRAM buffers used to store the audio samples are protected at Linux device tree level to prevent D1 domain from accessing them directly. It is worth remembering that it is also possible to make use of a hardware-based, stronger protection mechanism by exploiting the i.MX8M Plus Resource Domain Controller (RDC).

The inference application (IAPP) running in D1 uses a simple sysfs-based interface to interact with the firmware running in D2. As such, the software operates like this:

The firmware running in D2 is implemented as a FreeRTOS application. The use of a real-time operating system, combined with the intrinsic characteristics of the Cortex M7 in terms of interrupt latency, make this core extremely suitable for tight real-time constrained applications. Nevertheless, nothing prevents to choose a bare metal coding style instead.

IAPP runs the inference on a convolutional neural network (CNN) trained to spot a predefined set of keywords. The CNN was trained with TensorFlow on several audio spectrograms on the basis of this tutorial. It was then deployed in TensorFlow Lite format.

Before running the inference, IAPP pre-processes the audio samples to match the format used to train the CNN.

Most of the libraries needed by IAPP and other deep learning applications are provided by the NXP eIQ software ecosystem.

This demo was arranged in order to execute the following boot sequence:

Please note that the Cortex M7 firmware has not to be started before the Linux kernel necessarily. It is also possible to start MFW from user-space Linux.

Watch our dedicated video were is possible to see this demo in action: