This application note describe how to build the software components required to set up asymmetric multi-processing (AMP for short).

The latencystat demo is a RPMsg-based application that exploits sophisticated techniques to handle inter-processors communication and synchronization.

Thanks to latest technological improvements, multicore processors are becoming popular in embedded world too. These architectures allows the implementation of processing schemes that were not feasible with traditional single-core CPUs. Among these, one of the most interesting is asymmetric multiprocessing (AMP for short). This configuration permits to address several requirements that the embedded system developers struggle to handle in case of single-core systems.

This application note describes in detail the implementation of Linux/FreeRTOS asymmetric multiprocessing configuration on DAVE Embedded Systems AXEL LITE SoM. This configuration is a typical example about how to leverage AMP flexibility to combine, on one single piece of silicon, the versatility of Linux o.s. for general purpose computation, connectivity and HMI and the determinism of an RTOS to satisfy real-time constraints. Since AXEL family products are all based on Freescale i.MX6 processors, what is described here applies to AXEL ULTRA too.

As known, AMP allows a multicore system to run simultaneously [1] multiple Operating Systems (OS) that are independent of each other. In other words, each core has its own private memory space, which contains the OS and the applications that are to run on that core. In addition, there can be some shared memory space that is used for inter-core communication. This is in contrast to Symmetric Multiprocessing (SMP), in which one OS runs on multiple cores using a public shared memory space.

Thanks to AMP, developers can use open-source Linux and FreeRTOS operating systems and the RPMsg Inter Processor Communication (IPC) framework to quickly implement applications that need to deliver deterministic, real-time responsiveness for markets such as automotive, industrial and others with similar requirements, while preserving the openness of Linux.

The following picture depicts the structure of the system. 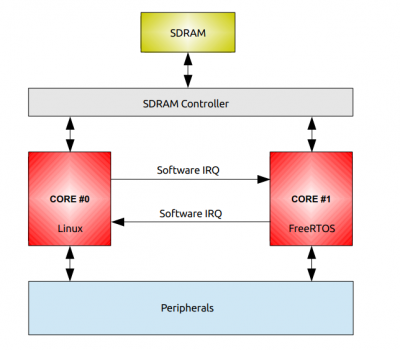 [1] This is true simultaneity because multiple instructions are executed at the same time.

Inter-core communication is based on RPMsg framework (please refer to http://omappedia.org/wiki/Category:RPMsg and https://www.kernel.org/doc/Documentation/rpmsg.txt for more details).

The adoption of a standardized and mainlined protocol improves dramatically the portability and the maintainability of the application code.

The picture below shows how the system memory is fragmented. The portion of memory used to create a shared area between the two cores – ring buffers – is allocated inside the 256 MByte region used by FreeRTOS. 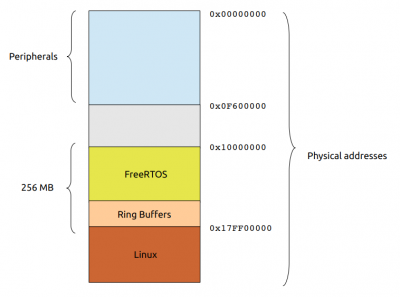 AXEL Embedded Linux Kit (XELK for short) provides all the necessary components required to set up the developing environment for:

DAVE Embedded Systems provides all the customization required (in particular at bootloader and Linux kernel levels) to enable customers use the standard i.MX6 development tools for building all the firmware/software components that will run on the target system.

In order to be able to compile the software required in this demo, it is necessary to:

Please refer to the XELK Quick Start Guide for further details on XELK.

N.B.: this application note has been tested using XELK 2.0.0.

The following sections describe how to build the software components required to set up asymmetric multi-processing (AMP for short) configuration required to run Linux OS on first Cortex®-A9 core and FreeRTOS on second Cortex®-A9 core.

The latencystat demo is a RPMsg-based application that exploits sophisticated techniques to handle inter-processors communication and synchronization.

The software components for this application note are provided as git repositories, so the user can immediately get access to the source trees and keep these components in sync and up to date with DAVE Embedded Systems repositories.

Assuming that a local repository has not been created, clone the remote AMP git repository:

The following paragraphs describe how to build the software components required for this application. Please note that:

The FreeRTOS application programs the EPIT1, which uses 66MHz as time-base (prescaler=1), setting FFFF.FFFF - 0x000F.4240 (1k tick) as the compare value. The timer starts a countdown from 0xFFFF.FFFF and, as it reaches the compare value, it triggers the ISR and toggles the EIM_D19 pin.

The ISR counts the number of ticks after the compare value and saves that information to return it to the Linux application for the histogram calculation.

Select the Axel board configuration:

To run this example, Linux kernel must be rebuilt. Thus configure the kernel using imx_v7_axel_defconfig as configuration file and enter the following command line, that changes the default load address of kernel and launches the building of the kernel and device tree images and the kernel modules:

The kernel modules, for the AMP application, should be installed on root-file system: this can be easily done using the modules_install make parameter

For building the FreeRTOS, a proper toolchain has to be used, for example, the official arm Linux toolchain ref. Specifically, the example here described was tested with the 7-2017-q4-major, which is available for download here. To install it, just decompress the archive.

Once the toolchain is downloaded and installed, enter the following commands to set up the cross-building environment accordingly:

Then run make to build the RTOS binary image:

This command will build the FreeRTOS kernel and an example application, named Rpmsg-Demo.

When the build process is completede, the example application executable is in the directory output/mx6dq/Rpmsg-Demo/axellite_rev_a. In order to run this application on the target, the Rpmsg-Demo.elf

For building the latercystat example, enter the latecystat directory and then una make:

The resulting binary must be copied from the building directory to the root file system, e.g. on the /home/root directory of the root-file system.

Running the AMP example application on the target[edit | edit source]

As stated before, this example shows a sophisticated approach that allows for:

The example performs IRQ latency measurements on FreeRTOS side by using a hardware timer. These measures are collected by the counterpart application running on Linux side and shown on console.

Move the device tree binary load address (the default 0x18000000 conflicts the AMP kernel loadaddr, it must be moved to a higher address) by changing u-boot environment for example as:

Moreover, it is possible to force the linux kernel to use only 2 CPUs adding the maxcpus parameter (i.e. on addmisc):

For a complete uboot enviromente refert to this:

Once all the components are built, please boot the system and launch the following commands:./

It is worth remembering that the previous commands load the required drivers to run the AMP configuration. Specifically, they:

This application is extremely useful for measuring interrupt latency and for verifying how it is affected by relevant parameters such as the CPU load on the first core, memory bandwidth utilization, the amount/rate of interrupts to be processed by the first core, operating frequency, etc.

For instance, the previous data refer to the following configuration:

In general, it is strongly recommended to characterize the latency on the basis of a realistic testbed that is as close as possible to the actual use case. It is also worth remembering that, in case of latency does not satisfy the application's real-time requirements, it is possible to adjust the arbitration priorities of processor's interconnect subsystem to reduce it.