When using Android for embedded platforms, software developers have to face several challenges. Most of them are due to the fact that Android was designed originally to run on mobile devices which meet specific hardware requirements. As such, the APIs to access the hardware interfaces from the application layer are defined accordingly.

These interfaces don't include the ones that are typically used in products addressing industrial applications: I2C bus, SPI bus, UARTs, etc. However, as Android popularity is growing outside the mobile world too, Google defined a set of additional APIs to standardize the access to these interfaces as well. These new APIs are part of the Android Things project.

This Technical Note describes the implementation of the APIs related to the SPI bus to access the bus SPI4 of the SBCX platform in the form of a native library. The solution was tested with Android 4.4.3.

As stated in the introduction, the solution has been tested on a platform running Android 4.4.3. From the software standpoint, this platform is a good example of an implementation where significant changes have been done to the Android Open Source Project (AOSP) in order to use it on an industrial embedded device.

Some of these changes modify the Android security model. In many cases, this is acceptable because the overall security of the product is not compromised (for instance, many devices used for industrial applications are not connected to the Internet and/or the physical access is granted to authorized personnel only). In general, system integrators have to assess the impact of such changes to verify that the resulting configuration meets the system requirements.

With regard to the platform here considered, the following is a not exhaustive list of the changes with respect to the standard/typical Android configuration used on mobile devices:

Development has been performed on the following hardware platform:

To verify the functionality of the library, a simple device (serial NOR flash memory) has been connected to the expansion connector (J33). Specifically, the SPI4 bus has been used. To build the example application using the library, the following version Android Studio has been used:

As depicted in the previous image, the serial flash memory has been connected to the SPI4 bus by using SBCX's expansion connector (J33).

The following table details the signals that have been used.

The following picture shows the organization of the software layers. 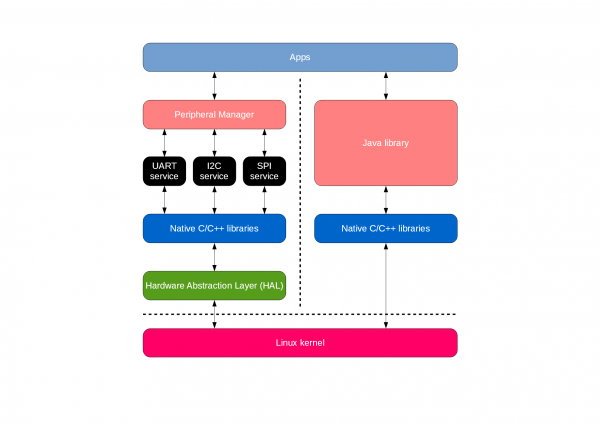 The solution depicted on the left is fully compliant with the Android/Android Things recommendations. The access to the I/O interface—the SPI bus in this case—is managed by the Peripheral Manager and by a specific service.

The solution depicted on the right is the one described in this Technical Note. From the application point of view, it is consistent with the Android Things APIs. However, it is easier to implement thanks to the direct access to the device file associated with the SPI bus.

To implement such solution, the following requirements must be met:

An example project is provided to illustrate how to use the native library. It includes the library itself and a simple application which reads the device identification data of the flash memory (READ IDENTIFICATION command). 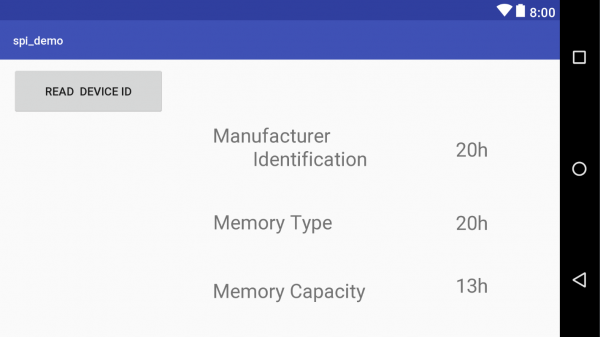 In order to open a connection to a particular SPI slave, you need to know the unique name of the bus. The get this name, run the following command from the serial console:

It is important to note that the above method is the only one available to retrieve the SPI device name because getSpiBusList() function is not implemented within the library.

Once this name is known, the APIs defined by Android Things can be used to access the bus because the library—named eu.dave.spi_dev—is consistent with them:

Configuration method are identical to the Andriod Things api ref.

Is important to note that async I/O are not supported in userspace at this time ref, furthermore LSB mode is not supported by the i.MX6 processor ref.

To communicate with the device the following methods are available

The example project is available for download at this link.