Because of widely available Internet connectivity, nowadays security concerns are not longer limited to PCs, servers and workstations but have become common to many embedded systems as well. Several hardware and software technologies have been developed to deal with this kind of challenges. ARM® TrustZone® technology is one of these. As stated in [1], Xilinx Zynq-7000 AP SoC natively supports TrustZone® technology, since it integrates dual-core ARM® Cortex™-A9 MPCore™ processor.

Even if this technology has been conceived primarily to address security issues, embedded systems designers can leverage it to implement innovative configurations, satisfying different in nature requirements that typically arise in industrial applications and deep embedded systems[a]. Two of such requirements are real-timeness and system integrity[b].

This White Paper describes the TrustZone-based solution that DAVE Embedded Systems has implemented to meet all these requirements on BORA and BORAX platforms. A technical description of the adopted approach is provided. Also, performance and characterization tests are detailed and considerations about future developments and improvements are included.

It should be remembered that this solution can be considered as a sort of natural evolution on the traditional AMP configuration described in [3]. For this reason, reading of this document is highly recommended.

Xilinx Zynq AP architecture provides unprecedented possibilities in terms of integration. In industrial world applications, this is often leveraged to combine on a single chip the implementation of real-time tasks with generic software applications and functionalities that don't have specific requirements in terms of real-timeness[c]. In addition, the flexibility offered by the FPGA - known as Programmable Logic or PL for short - allows system designers to implement in hardware custom IPs to add new interfaces and peripherals or to move processing modules from the software to the hardware realm[d].

The following list recaps the typical requirements that such systems must meet. This list has been compiled on the base of real world use cases (specifically medical, transportation, automation and telecom applications):

Traditional AMP[3] configuration satisfies REQ1 through REQ4. REQ5 through REQ8 are not satisfied instead. About integrity, for example, an application with root privileges could access memory regions that are supposed to be exclusively accessed by code executed in W1. This may lead to unpredictable behaviors and to potentially catastrophic consequences. This is where TrustZone technology comes to help: it establishes a sort of barrier between the two worlds and prevents W2 code from unauthorized accesses to certain regions of the processor's addressing space.

This section describes in detail the solution implemented by DAVE Embedded Systems to overcome the limitations of basic AMP configuration a to satisfy all the requirements listed in section Limitations of traditional configurations.

The major difference with respect to the traditional AMP configuration is the use of a software monitor, specifically a customized version of TOPPERS SafeG [4] [5] [6].

As shown in the picture, the monitor can be viewed as a software layer that lies between Trust/Non-trust worlds and underlying hardware. The monitor is responsible for:

Later, once the trusted OS is ready, it will do a specific SMC that will do the context switch that will start the non-trusted OS.

About operating systems, Linux has been chosen for Non-trust world, while FreeRTOS has been selected for the Trust world. At the time of this design, the Linux/FreeRTOS combination has proven to be the most appealing for the majority of applications that this solution addresses. Nevertheless different combinations are possible[e].

About the multi-processing scheme, the two Zynq core are assigned statically to the two world (core0 to Linux, core1 to FreeRTOS). This allows to:

From the memory point of view:

These choices lead to the configuration depicted here.

System memory partitioning is shown by the following picture. 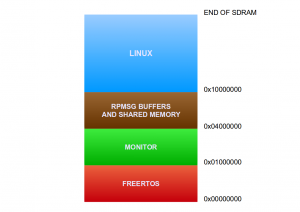 The boot process consists of several stages that are detailed in the following list.

Even if it is technically possible to implement a system where W1 and W2 are completely isolated, the majority of real applications need a communication mechanism between the two worlds[g]. Several options are available to implement such a mechanism, each of which having different pros and cons. Exhaustive comparison of all of them is beyond the scope of this paper. Nevertheless some aspects will be briefly discussed and some useful links will be provided to study this notable subject in more depth.

The following criteria have been taken into account to determine how to select the communication mechanism:

The first criteria guarantees future maintainability on Linux side. Generally speaking, it is expected that the GPOS needs relatively frequent maintenance activities in order to add new functionalities or fix vulnerabilities and bugs. In contrast, RTOS side is typically more stable and easier to maintain. Therefore, selecting a communication mechanism that is included in mainline Linux kernel is preferable from the point of view of overall system maintainability.

The second criteria is very important because, as discussed in following sections, it is absolutely crucial that the communication channel - that affects directly the degree of isolation between W1 and W2 - is very flexible in order to adjust it to application-specific requirements as needed.

Different solutions have been evaluated, including but not limited to OP-TEE[7], dualoscom[8], RPMsg[9], [10] and OpenAMP[11]. The choice has fallen on RPMsg that has been considered the best compromise among the available options. It should be recalled that this choice is reversible, in the sense that if application-specific requirements can not be met by RPMsg, it can be replaced by a different communication scheme.

As specified by REQ8, L2 cache must be able to be enabled (at least) on W2 side. As stated in [12] and [13], L2 cache - in contrast to L1 - is a shared resource in Zynq implementation. As such, in case both cores have to use it, specific techniques have to be implemented to handle it properly in dual-OS AMP configuration. In principle the approach that has been adopted allows to implement different strategies related to L2 cache management. The actual configuration that has been used to conduct the tests described in this section assigns the whole L2 cache to the W2 world, as depicted in the following picture. 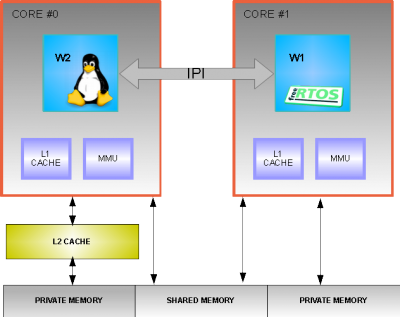 This configuration has been chosen for several reasons:

For sake of completeness, it is recalled that it is also possible to enable L2 cache in W1 too, without breaking REQ5, because ARM PL310 L2 cache controller support the TrustZone technology and does not allow the non-trusted OS (W2) to access trusted OS (W1) cached data. However, enabling L2 cache for W1 may improve its computational performance but, in general, reduces real time determinism as well. In case L2 cache unavailability on W1 side is unacceptable, on-chip memory (OCM) can come to help to mitigate this issue.

The use of L1 and L2 is strictly related to performance of ARM cores. There's also another precious resource that can increase core performance without affecting determinism, which is the OCM.

In SOCs, OCM is usually tightly coupled to ARM core, providing access performances that are comparable to L2 cache. This allows to leverage it to compensate for the unavailability of L2 memory.

The most common scenario is to:

Some basics tests have been conducted to characterize the system configured as described above. The figure the tests focus on is the interrupt latency on W1 realm. This value has been measured under different system load conditions to verify if and how the non real-time world may influence the real-time world.

About Linux side, two load conditions have been considered:

The main task on the RTOS side is the latencystat demo provided with AN-BELK-001[3], which:

The following conclusions can be drawn from the test results:

Future work will first focus on an additional feature that has not been included in the requirement list but that is undoubtedly useful in several applications. We are referring to the possibility of performing a complete reboot of the GPOS under the control of the RTOS, while this keeps operating normally. For instance this can be exploited when the RTOS needs to work as software watchdog for W2 activity: in case no activity is detected for a certain period of time, GPOS can be shutdown and rebooted.

Another aspect that should be investigated in more depth refers to the effects of the communication between W1 and W2 on the IRQ latency and the integrity of the real-time world. This matter is strictly related to the degree of isolation between the two worlds. In this work a strong-isolation approach has been adopted, meaning that

These assumption may be not verified in real applications, however specific techniques can be implemented to manage these situations (see for example [8] and [15]).