DM8148 processor provides a rich video subsystem that integrates input ports. These are described in detail on chapter 12 of [1] Technical Reference Manual.

From the architectural standpoint, VIN0 and VIN1 ports belong to the HDVPSS subsytems. For the sake of completeness a simplified block diagram of it is shown below. 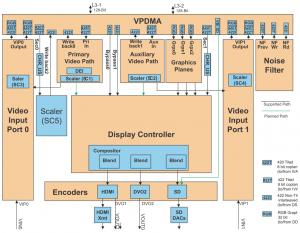 Camera parallel interface belongs to the Imaging Subsystem (ISS) instead. As ISS documentation is released under NDA, no information are provided here. For more details about it please contact your local Texas Instruments sales representative or FAE.

The following is a list of VIN0/VIN1 main features:

The following tables lists which signals - referred to video input/output ports - are routed to Maya SODIMM connector and thus are available to user application. It is also useful to visualize potential issues due to the pads' multiplexing scheme.

Following is a brief summary of video input ports available on Maya connector: