This Application Note (AN) is associated with this webinar organized by www.lauterbach.it Lauterbach Italy, DAVE Embedded Systems, and NXP in May 2021.

The webinar showed advanced techniques used to debug, trace, and energy profile the code executed by the NXP i.MX8M SoC powering the Mito8M system-on-module (SoM) with the aid of Lauterbach tools.

Specifically, this article deals with JTAG debugging, which is a stop-mode technique. Unlike run/mode debuggers such as GDB, this means that the debugger stops the processor, for example, to execute the code step-by-step or when it hits a breakpoint. Another fundamental characteristic of this mode is that the processor cooperates with the debugger for controlling the execution of the code and for accessing internal resources (CPU registers, RAM/flash memories, on-chip peripheral registers, etc.). For more details on JTAG debugging, please refer to this document.

Tracing is an extremely powerful technique that comes to help not only to "enhance" the debugging. It is also an outstanding troubleshooting weapon and allows advanced measurements, profiling, and specific software-related testing like code coverage. You can think about it as a sort of "movie" that is shot in real-time and in a non-intrusive fashion while the processor is running. Later on, it allows engineers to scrutinize all the processor's activity around specific events that occurred in the past. For instance, this is astonishingly useful for analyzing errors, bugs, or other situations that do not allow to stop the processor. With respect to tracing, three different strategies are here illustrated:

In this AN, tracing will be also used to show how to carry out energy profiling in order to correlate the power consumption with the execution of the code.

It is also worth remembering that Mito8M SoM is electrically and mechanically compatible with i.MX6-based AxelLite SoM. Therefore, Mito8M can be mated with the SBCX carrier board directly. Nevertheless, to fully leverage all the functionalities it provides, an adapter board is required. Namely, the adapter board allows to access physical interfaces that are used for the purposes here discussed.

Regarding the software configuration, a typical Linux SMP setup was used. Specifically, the kernel 4.14.98 was utilized in tandem with a root file system built with Yocto Sumo.

This chapter details the Lauterbach tools used for this demonstration. 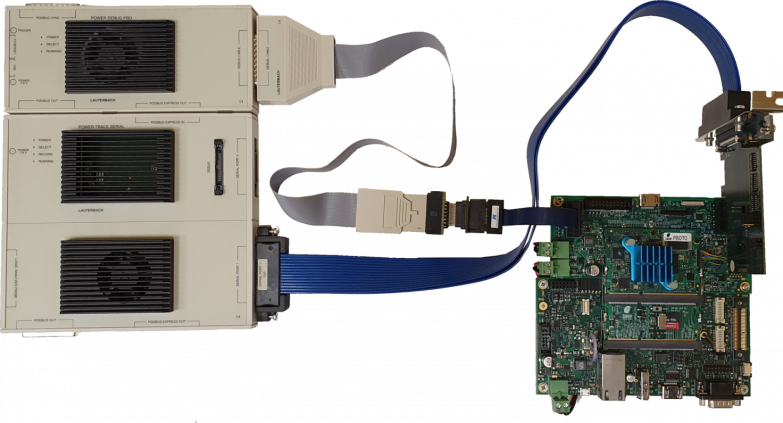 For a general introduction to debug features provided by TRACE32 tools, please refer to https://www.lauterbach.com/manual.html:

The following sections describe how to configure the Lauterbach TRACE32® debugger to support debug and trace of Linux running on the quad-core i.MX 8M Application Processor by NXP Semiconductors.

In an SMP system the tasks are dynamically assigned by an SMP operating system to the cores. For debugging SMP systems, only one TRACE32 instance is opened and all cores are controlled from this instance.

A selector is available to switch the core-specific information to a selected core. 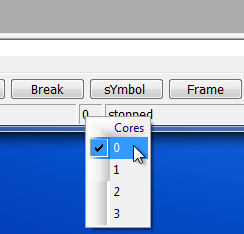 On an SMP system the program execution on all cores is started with Go and stopped with Break. The same onchip breakpoints are programmed by the debugger at the same time to all cores. If a breakpoint is hit, TRACE32 selects the core on which the breakpoint occurred.

Reference scripts for startup and for configuring the Analog Probe are available for download: please refer to Resources section below. For more details about the PRACTICE batch language, please refer to https://www.lauterbach.com/manual.html:

The symbolic information is useful for HLL debugging, or setting breakpoints, stepping through the code, viewing variables, and many other aspects of debugging.

The compiler must be configured in order to generate debug symbols. The vmlinux file for the running kernel must be available, in order to load the kernel debug symbols. No instrumentation is needed in the kernel source code for debugging with Lauterbach debuggers, but it’s important that the vmlinux file is generated from the same kernel build as the zImage or uImage running on the system.

Specific (TrOnchip) options must be configured to avoid automatic Break of TRACE32 debugger, in case PageAbort or DataAbort events happen due to normal Linux operations.

In the following paragraphs, the basic TRACE32 Linux configuration will be introduced. For more details, please refer to https://www.lauterbach.com/manual.html:

The TRACE32 RTOS kernel awareness technology makes the debugger aware of the OS running in the target system. Debug is significantly simplified, as the user can immediately access all the components of the OS and the applications. The Executable and Linkable Format (ELF) binary image, created at kernel build time, is also used by the TRACE32 kernel awareness for Linux.

While configuring the TRACE32 kernel awareness for Linux, a specific menu file for Linux can be loaded which includes many useful menu items developed for the TRACE32 GUI to ease Linux debugging. 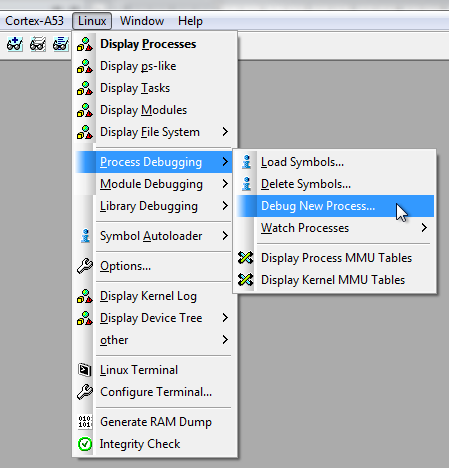 In Linux embedded, the Lauterbach debuggers provide a very tight integration with the RTOS. The kernel awareness supports the Linux MMU format and is able to handle virtual memory addressing.

To provide full debugging possibilities, the debugger has to know how virtual addresses are translated to physical addresses. If an OS that runs several processes at the same logical addresses (e.g. Linux) is used, the hardware MMU in the CPU only holds translation tables that allow the debugger memory accesses to the code/data of the kernel and the currently running process. The OS itself maintains the translation tables for all processes, because the OS is responsible for the reprogramming of the hardware MMU on a process switch. The debugger can access code/data from a not currently running process using the information from the OS MMU tables. An automatic table-walk method is available in TRACE32, walking through the OS MMU tables to find a valid logical-to-physical translation, in case it’s not already cached in TRACE32.

The Linux kernel can be compiled to allow linking of additional modules at runtime (kernel objects). The Lauterbach debuggers also support kernel modules debugging, starting from the initialization function. 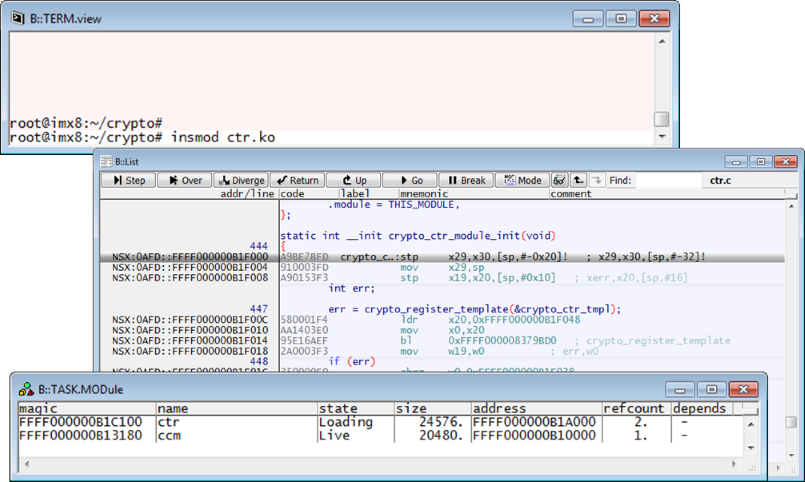 User process debugging is also available, starting from the very beginning of the process. If the process loads shared objects, they are loaded in the process address space when the related instructions are executed for the first time (demand paging).

The Lauterbach debuggers also support debug of threads for multithreaded processes. In this case, the same address space is shared between different threads and the symbolic information can be loaded only once per process.

In general, the same techniques used for debugging kernel code, such as setting breakpoints, stepping through code, watching variables, and viewing memory contents, can be performed in the same way for processes and tasks.

Virtual address spaces are distinguished in TRACE32 using the concept of spaceID. The memory addressing is extended using the lower 16 bit of the process PID, allowing in this way to distinguish between equal virtual addresses for different processes. 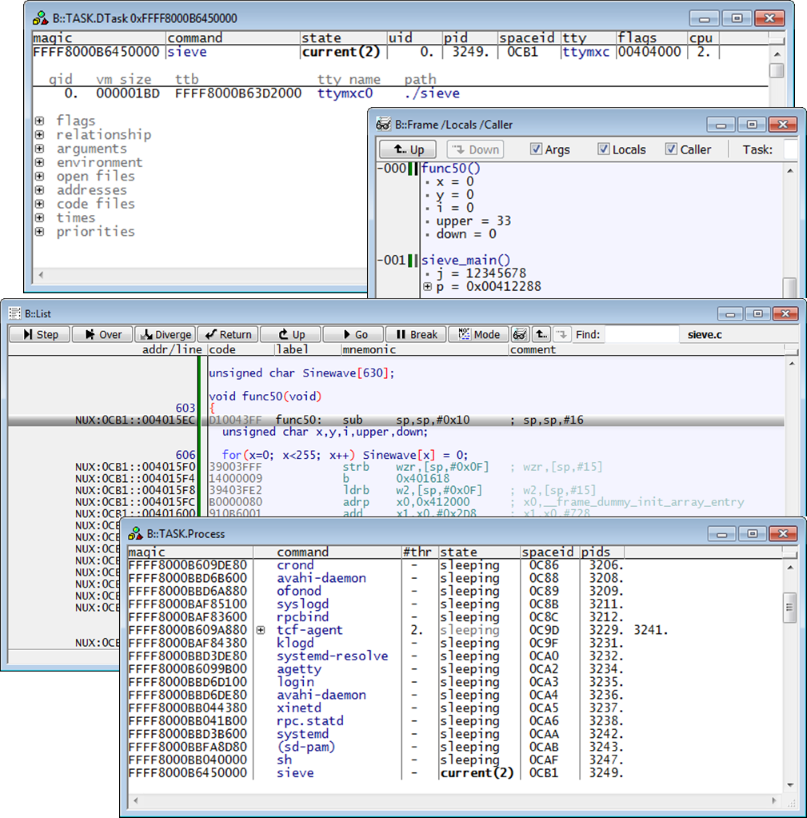 In TRACE32 many trace views are available: each trace window will follow the time / record synchronization of other trace windows, if the option /Track is used. Many statistical views are also available.

The trace data can be read out via JTAG, when the trace recording has ended. 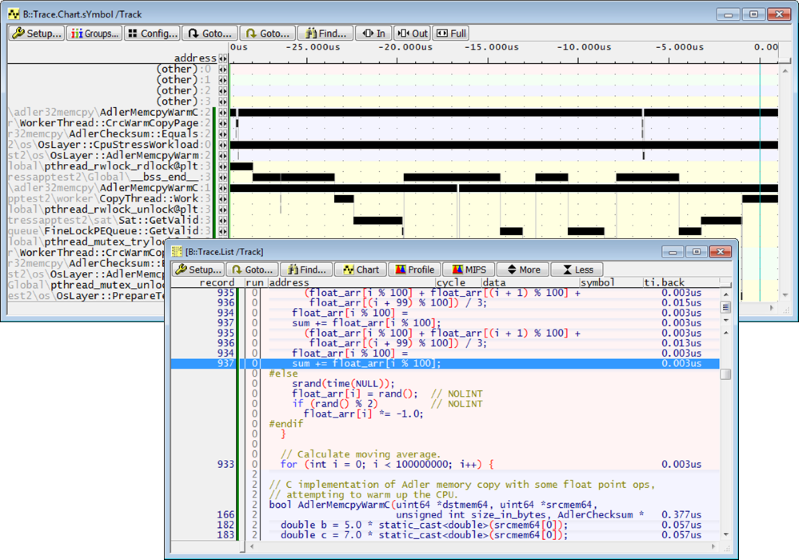 The ETM trace information can be combined with other trace sources or passed directly offchip to the Trace Port Interface Unit (TPIU). There it will be captured by a trace port analyzer (ETM Preprocessor). 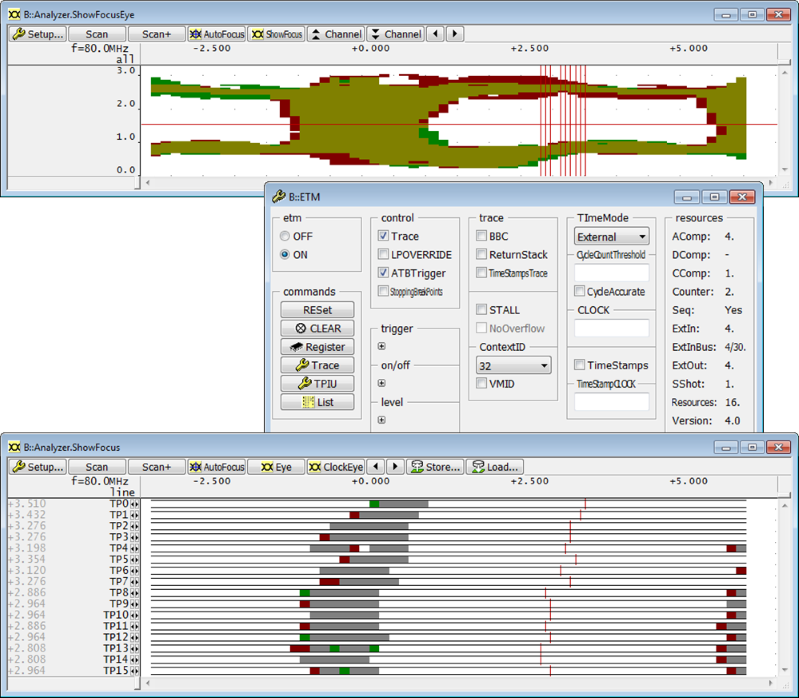 PowerTrace Serial is an extension to the debug module TRACE32 PowerDebug PRO and offers a trace memory of up to 4 GByte, which can record trace data conveyed offchip via a serial trace port.

The i.MX 8M Application Processor implements a PCIe Gen 2 interface which allows to reach a speed of 5GT/s. The PowerTrace Serial can be configured as PCIe end-point and its PCIe memory can be mapped in the ETR. In this way the program flow trace exported via ETR can be stored offchip in the PowerTrace Serial memory. 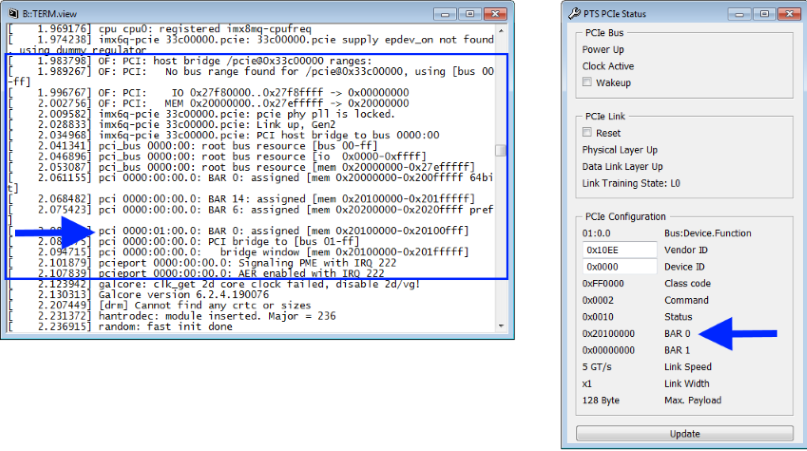 The MITO 8M carrier board is equipped with a connector compatible with the Analog Probe layout. This allows to profile the energy consumed by the running application, performing an analysis of the instantaneous power consumption, which can be correlated with the program flow trace. The purpose is:

Specific views are available in TRACE32 to analyze the instantaneous power and energy consumed for a given function. Additional settings are available for triggering: e.g. voltage or current are greater / smaller than upper / lower limits. 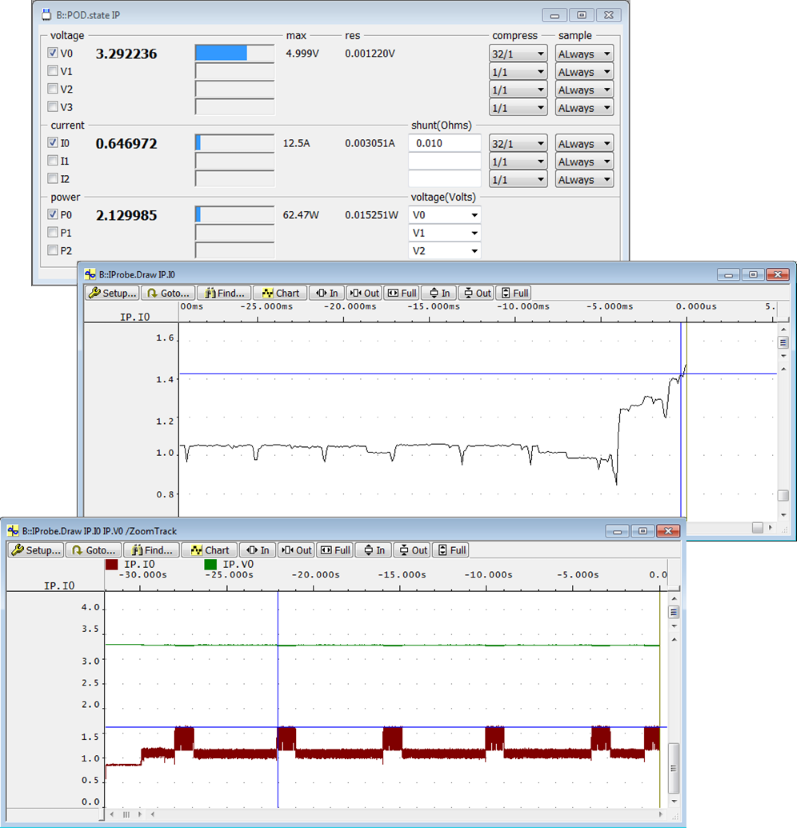 In the pictures below, all the concepts previously discussed are shown as a summary global view of TRACE32 debugger. 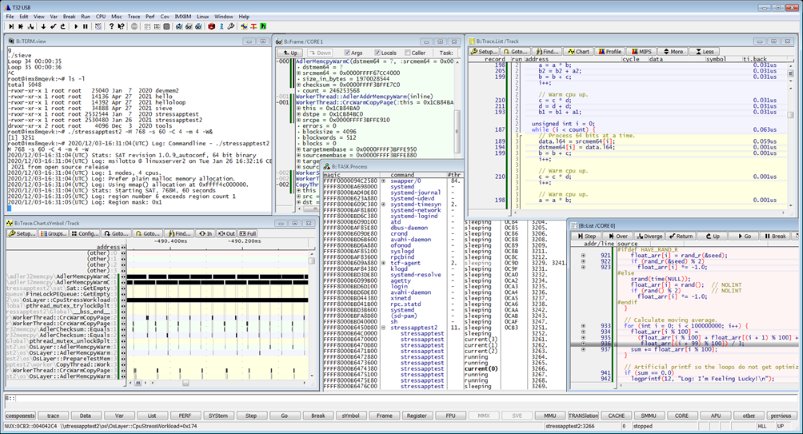 The TRACE32 scripts used for this demonstration can be downloaded here.

Webinar recording is also avalaible. It is in Italian, but it is possible to enable English subtitles as well.

This article has been mainly written by the Lauterbach Italian branch office.