As known, Android popularity is growing even in the market segments different than consumer/mobile.

The use of Android in such applications poses tough technical challenges because the hardware platforms are not designed to be strictly compliant with the specifications defined by Google. Consequently, significant modifications to the Android Open Source Project have to be implemented in order to achieve a smartphone-like user experience, even if the underlying platform may have very few things in common with such a device.

This technical note describes one of these cases. Specifically, it refers to a turn-key product that DAVE Embedded Systems developed for a customer that manufactures biomedical devices.

A simplified block diagram of the hardware platform is depicted in the following image. 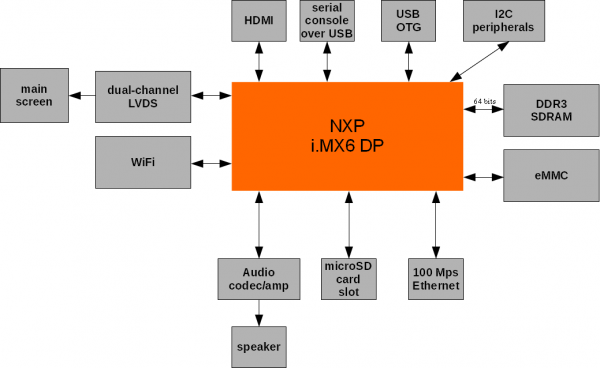 Block diagram of the hardware platform

From a functional standpoint, the device is a sort of industrial tablet, which is permanently connected to the rest of the equipment. The user interacts with its 10.1" capacitive touchscreen to control the whole machine, which is a scanner for ophthalmic applications.

Modifications to the Android Open Source Project were made in order to support main screen mirroring on the HDMI output and to support the WiFi chipset installed onboard. This chipset features the WiFi Direct protocol for screen mirroring over WiFi. As this chipset was not supported at all, such modifications were implemented not only at the customized Android device layer but also at the system, hardware, external, and platform layers. Once the WiFi chipset is supported all down to the lowest level of the software stack, the Android framework enables WiFi functionality for the device.

One of the advanced features of this product is the capability to drive three video outputs simultaneously, as per customer's requirements.

Specifically, the main screen can be mirrored both on the HDMI output and through a WiFi-Direct connection. As the main screen resolution is 1920x1280 @ 60fps, the aggregated memory bandwidth requirement is considerable. To satisfy it, the Dual Plus version of the well-known i.MX6 system-on-chip (SOC) from NXP was chosen. This SOC provides significant enhancements over its predecessors in terms of graphics performances, in fact.