This document describes a practical application of BoraX SOM. Specifically, it illustrates the use of such SOM to build a module to be integrated into an Automated Test Equipments (ATE).

The following picture shows a simplified block diagram of the entire system. 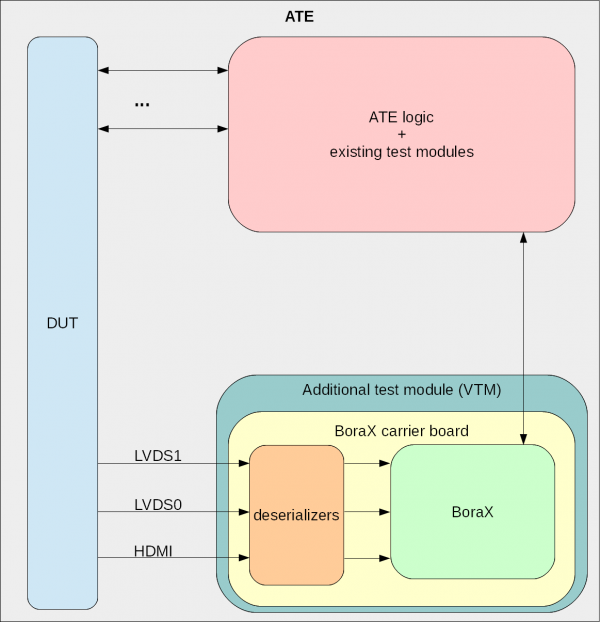 The ATE tests the functionalities of the product–also known as device under test (DUT)–by exchanging data over its numerous interfaces. In this case, the DUT integrates some video outputs (namely HDMI, LVDS0, and LVDS1) that consist of differential pairs. These outputs usually drive LCD screens or HDMI monitors. In order to test them, the easiest solution is to connect such displays and to verify that the test images are visualized properly. Even though this approach is straightforward, it is very inefficient from the economic standpoint because it is slow and error-prone, as it requires a human operator to visually inspect the displays.

The solution described in this technical note addresses this issue. By implementing an automatic test system, it fully releases the operator from this task. Also, the test is much quicker and much more reliable, as it implements a 100% coverage of the pixels the test frames are composed of.

The additional test module (VTM) consists of a carrier board hosting the BoraX SOM. This board was designed according to the guidelines detailed here.

Thanks to the rich set of available interfaces of BoraX, the integration of the new module was straightforward. It acts as a slave with respect to the main test module which implements the business logic of the entire ATE.

The video streams are connected to the deserializers which populate the carrier board. They convert the streams into parallel single-ended busses which are fed to the Programmable Logic (PL) of BoraX.

The PL integrates the actual test logic, which is depicted in the following image. 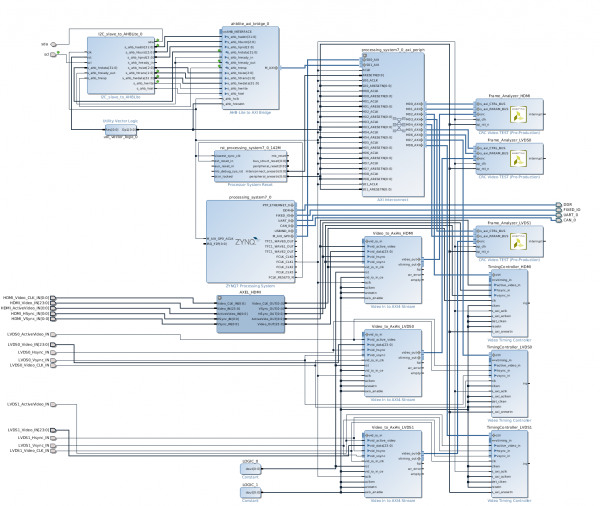 On this specific implementation, the DUT has 3 video output interfaces: HDMI, LVDS0, and LVDS1.

The VTM is able to verify all the video interfaces at the same time thanks to the BoraX SOM resources availability, in terms of PL logic resources and pinout. The high pin count permits to connect 3 RGB parallel video streams with 24 bit of data.

The Checksum/CRC test logic can elaborate up to 60 frames per second on a Full-HD video stream. This reduces the ATE test time because on a time windows of few seconds the VTM can elaborate several hundreds of video frames.

All the PL logic blocks are connected to the AXI bus. Also, an I2C slave to AXI bridge was implemented.

This allows the VTM to work as:

This is possible with a single PL configuration bitstream thanks to using of Xilinx® LogiCORE™ IP AXI Interconnect core which allows connecting one or more AXI memory-mapped master devices to one or more memory-mapped slave devices.

The automatic test procedure consists of the following steps:

The acquisition of the LVDS/HDMI video streams can be optimized by using the built-in hard SerDes blocks provided by the Zynq SOC. This implementation would allow avoiding the use of the external deserializers.