Implementing correct power-up sequence for i.MX6 processors is not a trivial task because several power rails are involved. Axel SOM simplifies this task and embeds all the needed circuitry. The following picture shows a simplified block diagram of PSU/voltage monitoring circuitry: 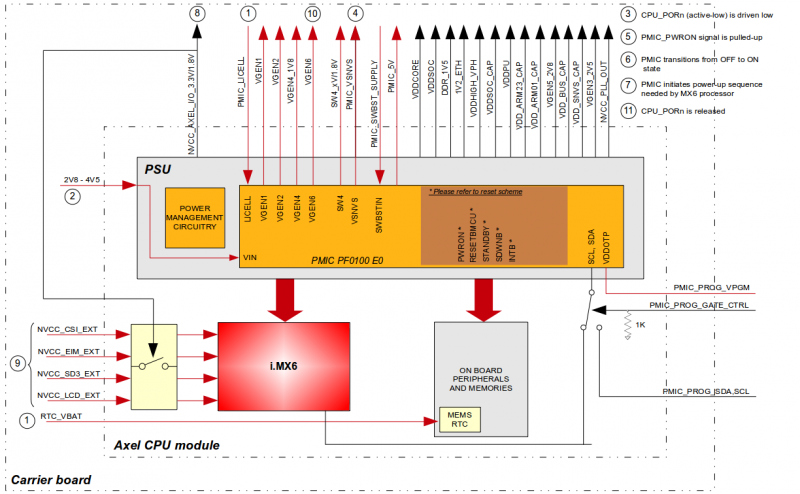 The PSU is composed of two main blocks:

The typical power-up sequence is the following:

NVCC_AXEL_I/O_3.3V/1.8V is generally used on carrier board to drive loads such as DC/DC enable inputs or switch on/off control signals. Depending on the kind of such loads, NVCC_AXEL_I/O_3.3V/1.8V might not be able to drive them properly. In these cases a simple 2-input AND port can be used to address this issue. The following picture depicts a principle schematic showing this solution. VDD_SOM denotes the power rail used to power AXEL ULTRA SoM.

If the SPI NOR flash is mounted on the AXEL ULTRA SoM, the NVCC_EIM_EXT input signal can't be configured as an extended range voltage, but it must be connected to a +3.3V rail (because the SPI bus used internally for the NOR flash shares some pins of the EIM bank).

The following list describes in detail the power rails and the power related signals. Please note that PMIC regulators ouput voltages can be changed only if explicitly allowed.

For further details, please refer to the PMIC documentation: http://www.freescale.com/webapp/sps/site/prod_summary.jsp?code=MMPF0100%7CPF0100