This Technical Note illustrates how to use the SBC Axel (SBCX for short) to implement a Microsoft Azure IoT Edge-enabled device. Thanks to its flexibility and to its rich set of I/O interfaces, the SBCX single-board computer can be leveraged to implement an IoT gateway with good processing power. This combination makes this board particularly suited for the applications where significant computations have to be deployed on the edge. 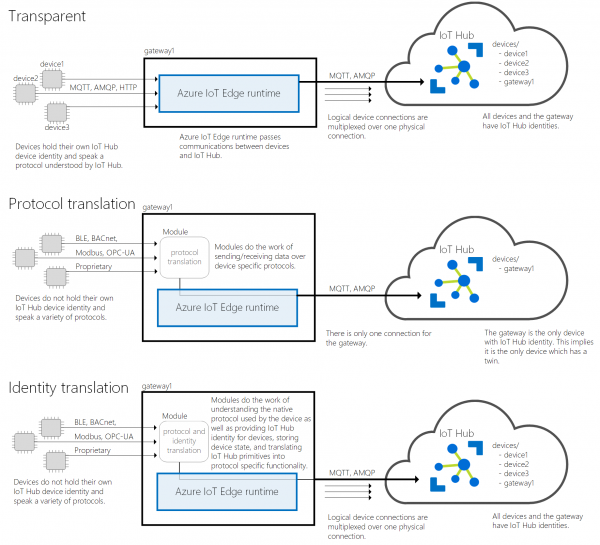 Gateway patterns as defined by Microsoft Azure (image source: How an IoT Edge device can be used as a gateway)

It is worth to remember that this Technical Note is not a step-by-step guide to set up the edge device and the cloud platform to implement an Azure-based system. Azure documentation is rich and detailed in this regard. Rather, this document aims to underline some specific SBCX-related steps required to run the Azure IoT Edge runtime on this device successfully. Nevertheless, in the following sections, several relevant links to the Azure documentation will be provided.

Regarding the hardware, the testbed used for this Technical Note (TN) consists of an SBCX single-board computer equipped with a quad-core i.MX6Q system-on-chip (SoC).

For what concerns software, the following configuration was used:

The Azure IoT Edge runtime is released as a Moby/Docker container. As such, the Linux kernel must be configured appropriately in order to provide all the functionalities required to support containerization.

Starting from the default configuration file (imx_v7_axel_defconfig), a new kernel configuration was set up providing all the required options. This configuration is available for download here.

To verify what options are missing, this script is very useful. Some of the checked functionalities are relevant for x86 architectures, however.

After setting up the Linux kernel properly, issue the following command to mount the cgroupfs hierarchy.

The system is now ready to install the runtime as described in the guide mentioned previously. The last step should procude an output like this:

After the Azure IoT Edge runtime is started, the IoT hub dashboard on cloud side should look like this: 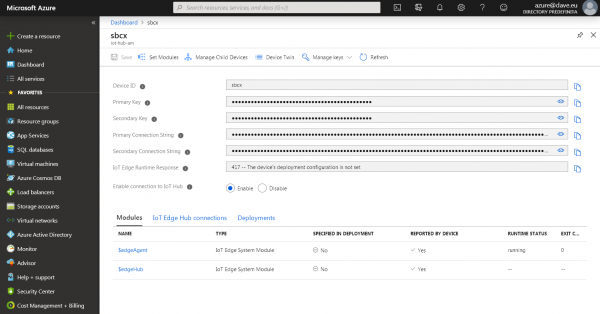