Difference between revisions of "FAQs (Axel)"

This page collects all the Frequently Asked Question regarding Axel Ultra/Lite SOMs and XELK kit.

Q: Where can I find Axel SOMs information?[edit | edit source]

A: please refer to the following table:

Q: Can you suggest some guidelines for the carrier board design?[edit | edit source]

A: As a starting point, you can refer to the Wiki page dedicated to the Carrier_board_design_guidelines_(SOM), that will highlight some best practices that applies to all SOMs. For specific information on Axel, please refer to the Axel Integration Guide Integration_guide_(Axel)

Q: I've received the XELK package. How am I supposed to start working with it?[edit | edit source]

Q: How can I update the XELK version?[edit | edit source]

A: All XELK source trees (U-Boot and Linux kernel) are provided as git repositories. This means that these components can be kept in sync and up to date with DAVE Embedded Systems repositories. Once the a git account is enabled, the developer can clone the repository and synchronize a source tree using git commands. For further details, please refer to XELK Updates.

Q: Where can I found the XELK Quick Start Guide document?[edit | edit source]

A: This document is included in the XELK distribution and can be downloaded from XELK_Quick_Start_Guide.

Q: Does XELK include support for the Yocto build system?[edit | edit source]

A: Yes, starting from version 2.0.0, XELK provides the axel-bsp repository and a meta-axel layer for integration with the Yocto build system. For additional details, please refer to XELK_Quick_Start_Guide.

Q: How can I configure the Axel system to boot from network?[edit | edit source]

A: Booting from network is very helpful during the software development (both for kernel and applications). The kernel image is downloaded via TFTP while the root file system is remotely mounted via NFS from the host. It is assumed that the development host:

Q: How can I access the git server repositories for updating?[edit | edit source]

A: for accessing git.dave.eu git server repositories, the VM Netowrk interface should be configured for Internet access

Here below an wired connection example for an IP address with Bridged configuration via Host network interface: 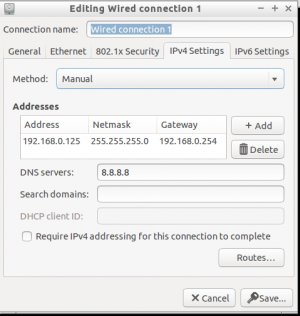 then simply test the Internet access using the ping command to Google's web site and then to DAVE's git server:

Q: How can I access GPIOs from user space[edit | edit source]

A: Users can access GPIOs using SYSFS entries from user space. This feature is enabled by default in the AXEL Linux kernel configuration. For further details, please refer to:

Q: How can I reduce the RAM amount to evaluate the performances of the low-end versions of the Axel SoM?[edit | edit source]

A: To evaluate the performances of the system with a specific amount of available RAM, the user can pass the mem parameter to the kernel, by setting the command line arguments in u-boot (for detailed instruction, please refer to the Change_Linux_Command_Line_Parameter_from_U-boot page).

For example, to limit the amount of RAM to 128 MB, create the following variables in u-boot:

And add the addmem variable to the boot macro:

For further details, please refer to the linux-am33x/Documentation/kernel-parameters.txt file of the kernel source tree provided with the XELK.

Q: How can I limit the number of active CPU cores?[edit | edit source]

A: To evaluate the performances of the system with reduced number of CPU cores, the user can pass the maxcpus parameter to the kernel, by setting the command line arguments in u-boot (for detailed instruction, please refer to the Change_Linux_Command_Line_Parameter_from_U-boot page).

For example, to set the number of active cores to 2, add the maxcpus parameter to the addmisc environment variable:

And add the addmisc variable to the boot macro:

For further details, please refer to the linux-am33x/Documentation/kernel-parameters.txt file of the kernel source tree provided with the XELK.

Q: How can I change the CPU clock frequency?[edit | edit source]

A: The frequency of the CPU can be changed on the run using the Cpufreq framework (please refer to the documentation included into the Documentation/cpu-freq directory of the kernel source tree). The cpufreq framework works in conjunction with the related driver & governor.

To view the available governors:

To view the supported OPP's (frequency in KHz):

To change the OPP:

Please note that OPP can be changed only using the userspace governor. If governors like ondemand is used, OPP change happens automatically based on the system load. Please also note that the imx6q-cpufreq driver (http://lxr.free-electrons.com/source/drivers/cpufreq/imx6q-cpufreq.c?v=3.10) works on a per-SOC policy (and not on a per-core one), so the cpufreq governor changes the clock speed for all the ARM cores simultaneously.

To change the governor (userspace in the example):

Q: How can I read the CPU temperature?[edit | edit source]

A: CPU temperature is reported by the Anatop Thermal driver. To read the temperature, enter this command from the Linux shell:

CPU temperature is shown without decimal point, but the latest three digits are decimal.

Q: How can I adjust LCD brightness?[edit | edit source]

Note: Xelk-3.0.0 has been released with a new kernel version which no longer requires the .n notation in the path. For this reason, the path to use is : /sys/class/backlight/backlight

To set a new brightness level, enter this command from the Linux shell (100 is an example):

Max value accepted for brightness can be read entering the following commands:

N.B. The brightness index is related to the kernel and dtb compiled version. I.e. in the example index .30 maybe different on your system.

The right index can be found entering the following command from Linux shell:

Q: How can I modify the splash screen in U-Boot?[edit | edit source]

By default, iMX6 RTC driver is built into the Linux kernel. Upon power-up, it prints informational messages that look like this.

To initialize it, please use these commands:

To enter RTC mode, use the shutdown command as shown in the following example:

If a coin call battery is connected to PMIC_LICELL, RTC will be kept alive even if 3V3VIN voltage is removed. Please refer to these important issues related to RTC power handling.

You can find the configuration's folder here:

To enable the serial communication, set the led's value to HIGH, as follows: