This application note shows how to interface BoraEVB to 5.7" thin film electroluminescent display Lumineq EL 320.240.36-HB. As staded on Lumineq web site, "Lumineq TFEL non-transparent displays are used in mining, marine, military, medical and many more demanding environments. TFEL displays are robust and reliable, and usually used in extreme environments, where traditional displays cannot cope with the conditions." These characteristics make these displays an ideal solution when is used is such environments.

This project is based on BELK 2.2.0. Reading of AN-BELK-004 is recommended since many concepts are shared by these two application notes.

For more information about Lumineq part, please refer to this link.

To interface the display a small adapter board is needed. On BoraEVB side it is connected to JP17 and JP23 headers. On display side it connects to LCD panel through a flat cable that is plugged onto JP3 header. At this link schematics are available for download.

Also the following changes need to be made on BoraEVB in order to provide LCD required power supplies (12V and 5V):

The following table shows the signals used to drive the display:

The following picture shows simplified block diagram of the design. In principle the structure of the design is the same of the one described in AN-BELK-004.

The following picture shows the block diagram of the Vivado project:

To implement frame buffer, a portion of main SDRAM is used. This area is allocated at runtime by linux frame buffer driver.

Every pixel on the display has 2 possible states, ON (light pixel) or OFF (dark pixel). In the frame buffer, each pixel is represented by 8 bits. A byte of value 0xFF represents an ON pixel, and all the other values (0xFE down to 0x00) represent an OFF pixel.

At this link the Vivado design is available for download. Please note that, even if this application note is based on BELK 2.2.0, this design has been implemented with Vivado 2013.4.

Two PL IOs, controlled by the linux driver, manage the power supplies of the display (5V and 12V from BoraEVB to Lumineq Display).

You will also see two Tuxes on the top left corner of the LCD, indicating that this Linux system has two cores: 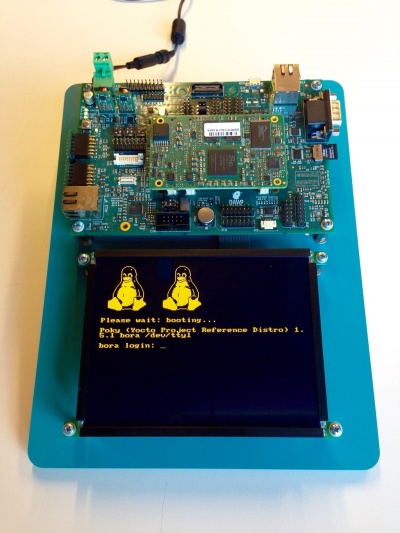