This application note describes the interfacing of Ampire AM-800480STMQW-TA1 display to BoraEVB and BoraXEVB. Main characteristics of this 7" TFT LCD panel are:

In case of BoraXEVB, no adapter board is needed. LCD panel is directly connected to J22 connector where PL bank 13's signals implementing LVDS interface are routed (see page 14 of the schematics). I/O voltage of bank 13 is set to 2.5V by configuring JP25 as follows:

(*) This signal is used to control backlight. It is usually driven by a PWM signal whose duty cycle is proportional to backlight intensity. For the sake of simplicity, in this project this signal is driven by a GPIO, thus only two intensity levels are supported (0% and 100%).

You will also see two Tuxes on the top left corner of the LCD, indicating that this Linux system has two cores, as shown in the following picture: 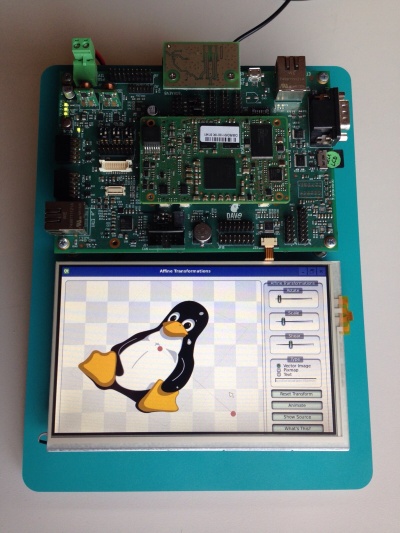