Difference between revisions of "BELK-AN-003: Interfacing DDR3 SDRAM to PL"

Even if PL can share main SDRAM with PS, several applications need a dedicated bank for FPGA IPs in order to have exclusive access and to maximize bandwidth. In any case, since this additional SDRAM bank is accessible via AXI bus, it is mapped in the processor's memory space and thus it can be accessed by PS as well.

BoraEVB can optionally be populated with a 16-bit 512MB SDRAM chip that is directly connected to PL (1). This application note describes how to enable the support for this additional memory bank. An example Vivado design is released along with this application note, based on BELK 2.1.0.

The following picture shows logical connection of the SDRAM bank. 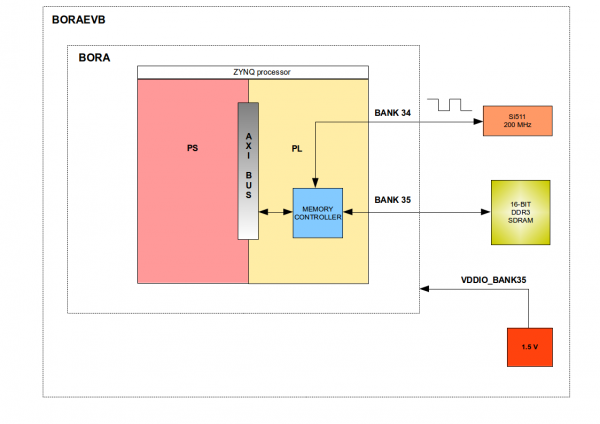 As depicted in the block diagram below, a memory controller has to be instantiated in PL to access SDRAM. This block has been generated with Memory Interface Generator (MIG) tool (http://www.xilinx.com/products/intellectual-property/mig.html).

Memory Interface Generator (MIG) is configured properly to work with Micron MT41K64M16JT-15E DDR3 memory chip at the frequency of 400MHz. It needs a precise external reference clock of 200MHz provided by an active LVDS oscillator connected on BANK #34 pins. The MIG is then connected to the PS through the AXI GP0 interface to allow user to access the external memory.

The Vivado example project can be downloaded from the following URL:

This project requires a 200 MHz clock source. It has been tested with

The bitstream and boot binaries can be downloaded from the following URL:

SDRAM bank is mapped in the PS's addressable space at physical address range 0x48000000-0x4FFFFFFF, as shown in the following picture:

It's also possible to extend Linux kernel memory with the external memory adding a second memory in the device tree:

The kernel patch can be downloaded from the following URL: